Given the sheer number of devices that it releases every year, finding the best Samsung phones can often prove to be a challenge for most customers. It doesn’t matter if you want a flagship or a budget device. Samsung offers plenty of options for all price ranges.

To make it easier for you to find the one that best suits your needs, our expert reviewers have created this list of the best Samsung smartphones. We’ll explain precisely why a device has made it on to our list and provide you with links to their detailed reviews.

There’s a great mix of devices on our list for August 2020, helped by the launch of Samsung’s new Galaxy Note 20 series. We have also included some of the impressive mid-range and affordable models that have been released this year.

Samsung wasn’t kidding around when it slapped the word “Ultra” at the end of its top-of-the-line Galaxy S20 model. This is a spec monster in the true sense of the word. Samsung introduced its 108-megapixel camera with this device and threw in a periscope lens setup that allowed for up to 100x hybrid zoom a.k.a Space Zoom.

With a massive 6.9-inch display, the $1,399 Galaxy S20 Ultra was among the first Samsung devices to feature a 120Hz refresh rate panel. Its chipset was paired with a maximum of 16GB RAM and 512GB of internal storage. Samsung even threw in a 40-megapixel front camera for good measure. The 5,000mAh battery is the biggest yet on any Galaxy S family device.

There’s no question about it, the Galaxy Note 20 Ultra tops our list as the best Samsung phone for productivity. Samsung has made a number of meaningful improvements to its latest flagship smartphone, particularly the S Pen upgrades. The S Pen latency has been dropped to 9ms in order to provide a more fluid and natural experience with the stylus.

The 6.9-inch Galaxy Note 20 Ultra also comes with the latest in smartphone technology as well as 5G support. It happens to be the first Samsung smartphone to feature a dynamic 120Hz refresh rate display. Samsung has also significantly improved the camera setup compared to its predecessor. There are several new software features and new camera modes that enable customers to get the most out of this $1,299 flagship. 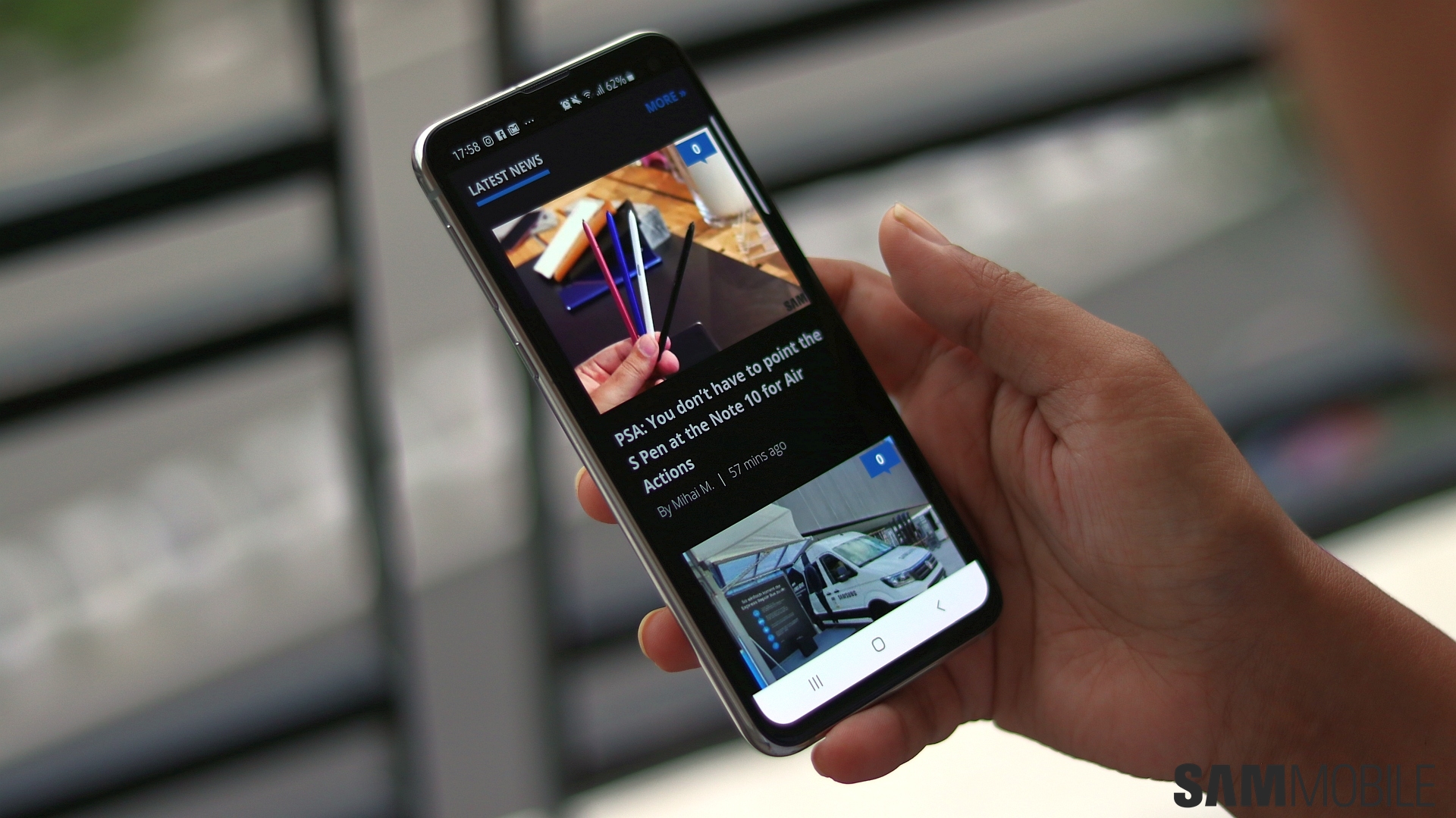 Don’t be surprised to see a 2019 model on the list. Samsung’s decision to offer a compact flagship in the form of the Galaxy S10e was very well received. The handset ditched curved displays for a flat panel and the finicky in-display fingerprint sensor for a side-mounted sensor. It retained Samsung’s signature metal and glass build as well as the AMOLED display.
The 5.8-inch display is perfect for those who prefer a smaller smartphone. Such compact high-end devices are few and far between these days and not everybody wants a giant display. It also had best-in-class tech for 2019 making it a very compelling option a year later as the Galaxy S10e can now be picked up at a significant discount for $549 even though it cost $749 originally. With the Galaxy S10e being among the devices that Samsung will release three Android OS upgrades for, it’s hard to beat the value proposition it offers in 2020.
Best Samsung Phone – Foldable: Galaxy Z Flip

Its 6.7-inch Infinity Flex display folds in half rather satisfyingly while the Hideaway Hinge makes excellent features like Flex Mode possible. With top-end specs, it’s no slouch either and will easily be able to handle whatever you throw at it. The cameras don’t really break new ground but this handset was never meant to be a camera champ in the first place.

The $1,380 Galaxy Z Flip isn’t going to occupy this position on our list of best Samsung smartphones for long, though. Samsung is coming out with the Galaxy Z Fold 2 next month and you can bet it’s going to be an extraordinary device.

Samsung made several key improvements to the Galaxy A51, the successor to its hugely popular Galaxy A50, and they have paid off. The Galaxy A51 remains one of the very highly regarded Samsung mid-range smartphones in 2020. The build quality is nice and the 6.5-inch Super AMOLED display is seriously impressive.

There’s plenty of power under the hood as well, with the $399 Galaxy A51 being able to power even the most intensive of mobile games. The camera setup got a major upgrade and the Galaxy A51 is actually Samsung’s first smartphone with a macro camera. Despite its modern makeover, the Galaxy A51 has kept the 3.5mm headphone jack, which many consider being of crucial importance in a mid-range device. 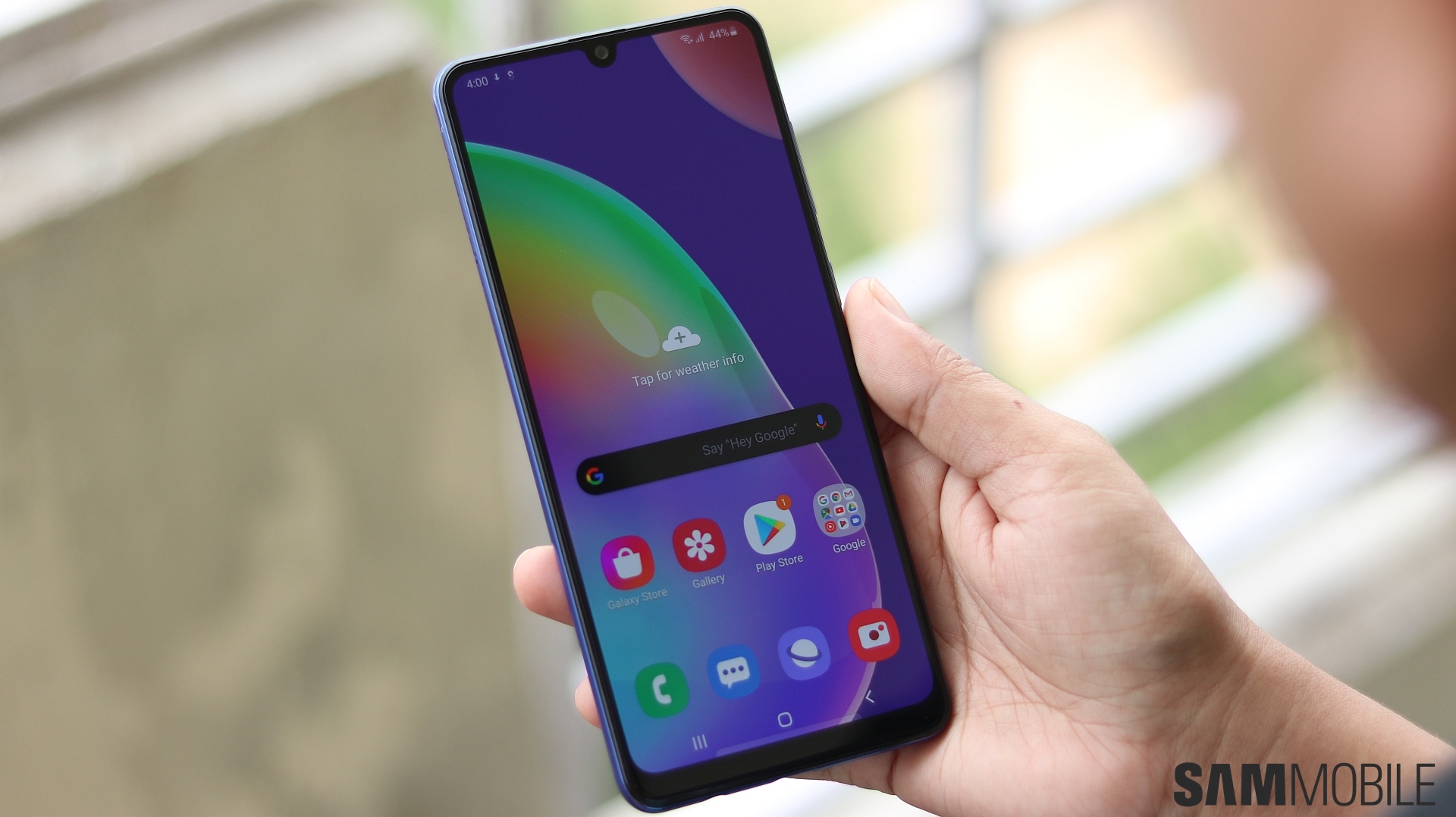 The Galaxy A31 is a great smartphone for customers on a budget. Despite being a budget handset, it features a 6.4-inch Super AMOLED display, 128GB internal storage, a quad camera setup and a very impressive 5,000mAh battery. Its MediaTek Helio P65 chipset isn’t suited to gaming, though, at least when it comes to resource-intensive games like PUBG.

It’s a decent budget smartphone otherwise. The AMOLED display is one of its biggest selling points and so is the 5,000mAh battery. Camera performance is decent as well while the design and build quality are both respectable.

Why These Are The Best Samsung Phones This Month

Samsung’s strategy has long been to offer something for everyone. We now have one of Samsung’s most diverse smartphone lineups. You have an absolute spec king in the Galaxy S20 Ultra to the extent of being over the top. The Galaxy Note 20 Ultra is certainly one of the best Note devices yet from Samsung as it builds on the feedback from Note loyalists and provides them with improvements they have long been asking for.

The Galaxy Z Flip is in a league of its own when it comes to foldable smartphones. There’s really no true successor for it on the market yet. It’s also a refreshingly unique device, perfect for those who are fed up with the monotony of smartphone design. The Galaxy S10e may have been out for over a year now but it’s still a great value for the kind of specs it offers.

Samsung has capitalized on the Galaxy A50’s popularity for the Galaxy A51 and made it a worthy successor. It’s a solid competitor in the highly lucrative mid-range smartphone market. The Galaxy A51 does everything that you’d expect a device of its caliber to do without breaking a sweat. Lastly, customers won’t have much to complain about with the Galaxy A31. It’s incredibly clear in its purpose and because of that, it’s worthy of being on this list.

Personality of the Week

Khaby Lame is now the most-followed TikToker in the world